At this particular time, avoiding contact with surfaces is really essential and Thermomat’s electronic taps technology can help us. Thanks to the electronic taps, in fact, we can avoid contact with the elements that surround us and perform normal functions without any contact.

Some studies have shown that the coronavirus can resist up to nine days on surfaces and then the risk of infection and contracting the virus is really very high.

Thanks to Thermomat’s electronic taps, which can be placed both in public bathrooms and in private homes, we can avoid these contacts because the water flow is delivered thanks to a photocell. 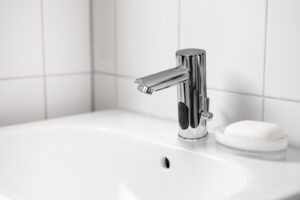 How do electronic taps work?

With electronic taps you do not touch anything, not even the faucet knobs.

The flow of water is automated thanks to the use of an infrared photocell that reads the movement of the hand under the faucet and dispenses water. But that’s not all:

on some models it is possible, manually or via a remote control, to change some parameters, such as the activation distance and the dispensing time, so as to optimize the comfort of use and water saving.

Will electronic taps save me money on my water bill?

Electronic taps can greatly limit the flow of water. Just think that a standard faucet can deliver up to 12 liters per minute, which is a huge waste and above all 6 liters per minute of water delivered.  Electronic taps, therefore, are also a valid aid to environmental sustainability, avoiding unnecessary waste of water: unlike a traditional tap – which can often be forgotten open – electronic taps for washbasins and urinals immediately stop the flow of water after use. It is estimated that thanks to the adoption of this faucet there is a real saving of 70% in water consumption. This saves money on your water bill and offers a big hand to the environment.

Electronic taps and coronavirus: why they are important

The contagion of the COVID-19 virus also occurs through contact with infected surfaces, i.e. surfaces that have been used by positive persons and that have not been sanitized and cleaned.

Continuous sanitizing of public restrooms such as those in facilities such as bars, schools and offices requires staff and an expense that not all businesses can afford.

Electronic taps, therefore, serve a really important function because hand washing is automated. What does that mean?

The procedure of water flow delivery thanks to the infrared photocell is activated by reading the movement of hands inside the sink. In this way we don’t touch the knobs and, by washing our hands, we guarantee the hygiene we need to defend ourselves from contagion; unfortunately the risk of indirect contagion is very high. For this reason, especially in public bathrooms, contactless solutions such as taps, dispensers, urinals and electronic flow meters are essential.

In a sensitive interaction and epidemiological framework all over the world, electronic taps are present in many public bathrooms.

Therefore, they represent the best solution to avoid contact with dirt residues and bacterial outbreaks, which are generally widespread in places used by thousands of users. In fact, these are places at risk, frequented by potential carriers of germs of all kinds and therefore particularly dangerous for children and the elderly. If this type of modern faucets, at first, was the prerogative only of places such as airports and stations, today there are many commercial premises that have installed them and use them with satisfaction.

I am a private individual, can I install an electronic taps?

Even private individuals, for reasons of hygiene and convenience, decide to switch to electronic taps and make a considerable technological leap in the direction of a hi-tech bathroom.

In addition, the energy benefits are also considerable, since setting a fixed temperature allows the boiler to do less work, limiting absolute consumption.

Last but not least:

Thermomat’s electronic taps are constructed through the use of a single piece of brass and are specially designed to avoid being damaged.

And that’s not all: the infrared sensors mounted on Thermomat’s electronic taps have been studied to avoid that, by deliberately forgetting objects in front of the photocell, the water flow is continuous.

What does this mean?

Suppose you are the victim of an act of vandalism: a person fixes an object in front of the photocell so that the water flow is continuous.

With the electronic taps of Thermomat you can rest assured because we have studied special sensors that prevent the blocking of electronic taps in the always open position and have a maximum time of water supply that varies from 50, 60 or 90 seconds, depending on the model of electronic taps that best suits you.

If the infrared sensor is ultimately covered for more than the above mentioned time the water flow will automatically stop thus avoiding unnecessary waste.

The revolution of electronic taps has been going on for many years, but in recent years it has become commonly used, because the awareness against waste has become part of everyone’s conscience, for a more conscious use of the resources that the planet offers you. For an innovative and ecological choice, electronic taps seem to be the right combination of modernity and attention to others, and that’s why we feel like suggesting it to all our readers.

For more details on individual products, consult the technical sheets of each product in our electronic taps section!